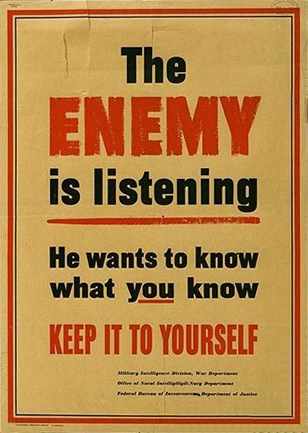 Operations Security (OPSEC) is a way of keeping information about our alliance and its operations away from enemy spies. Since the invasion of the south, we have been subject to spies in our corp, on our forums and in our gangs. OPSEC is a way of minimizing the likelihood of sensitive information leaking to our enemies.

OPSEC is not hard. It is mostly common sense and if you can't follow it you are most likely a moron or a pubbie and need to GTFO.

Do not give any information in public channels

This includes Channel passwords, Fleet/Gang locations, Names of Fleet Commanders, or pretty much anything that could be of any use to our enemies. Even in private channels (and especially in password-protected channels), there is a good chance the channel is compromised, so talking about any sensitive information should be limited to private conversations or gang/fleet chat whenever possible.

Because of the sheer number of allies that have access to intel channels, it's safe to assume they are compromised. Do not report anything about blues to the intel channels, and do not talk to your fleet about other blue fleets that may be out and about, unless it's part of the orders you have been given by your fleet commander.

Be careful what you say in local

There are many utilities that we use that were developed by someone not in the Imperium, are hosted by someone not in the Imperium, or a combination of the two. Be aware that your favorite mapping tool or mobile mail client could be reporting information back to the developer, who may be affiliated with a hostile or neutral group. Tools that require API access are most susceptible to this possible issue, only give externally hosted/developed tools the bare minimum of access to your API.

If you can't talk about it in Goonswarm General Bullshit (GFGBS), you can't post it on the forums, unless the FC specifically says so. General comments should be ok (e.g "Oh god we just murdered an LV fleet"), but no specific information about anything (ie, we just put 1 tower into reinforced we're anchoring a new one now) until the FC says it is ok.

Streaming of fleet ops is generally prohibited without the express consent of the Fleet Commander. Many FCs will be happy to allow you to stream, but you have to ask in advance, every time.

Even when you have permission to stream, there are a few rules to follow.